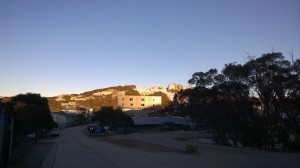 Ok, so I had to dust off the cob-webs (pardon the pun) and put some electrons on virtual paper. Humblest apologies for being off-line for so long, that’s if you missed me. If you didn’t miss me, sorry I am back.

Winter left in a hurry, replaced by all that is good about spring…except the snow melting, strong northerly winds, hayfever, the smell of dynamic lifter on the garden, changing clocks forward (daylight savings time) and school holiday madness in the city. Other than that, I love spring and all that it brings!

Our final weekend at Mt Buller brought together a great group of friends for a little bit of skiing and a lot of eating and drinking. A boisterous group at the lodge on the Saturday night partook in an array of goodies lovingly BBQ’d by Jim…chicken pieces marinaded in rosemary, garlic, chilli, olive oil and lots of fresh lemon zest and juice, slow braised pork belly (bbq’d to give a really nice caramelisation) courtesy of Alex and lamb rissoles with cumin, turmeric, smoky paprika, sumac, parsley and feta cheese…yep, fetta crumbled through the mix. Much, much goodness!

Some salads and freshly baked bread to round out the meat feast. Oh, and wine. Lots of wine!

Dessert was a surprise. I whipped up a chocolate self saucing pudding, while someone mixed together the fixings for a sticky date pudding. Confusion, wine, not sure which, but flour was inadvertently left out of the sticky date. Unsurprisingly the mix didn’t set. It was only then that the error was picked up. So, I did what any hungry (I was stuffed the gunnels, but still wanted sticky date pudding) I added a half amount of self raising flour, mixed and popped back in the oven. The comments when served surprised me…best sticky date pudding ever! Score!

The last few weeks have been a blur of pre-wedding diet food. Some stand out meals. Nah, who am I kidding. The stuff is okay, but is never going to substitute for real home cooked food!

Julia and I have an agreement. We must visit one nice restaurant a month. Not a big ask in a city like Melbourne. But being away every weekend and both of us super busy during the week, it simply hasn’t happened for a while. About to make up for it, though.

Was taken to Zia Rina’s Cucina by Phil from Armadale Cellars the other day for lunch. Phil’s been around the block a few times and he rates chef/owner Rina as good as any Michelin stared chef he’s seen on the continent. Must admit, the food is blindingly good. So much so, heading back there this week with a good friend who will be in town from Dubai. If any place can float Nick’s boat, this should do it. Oh, it’s BYO too, so I am going to hit Nick up to dust something off from his Arabian cellar…no doubt I will be doing the same from my cellar.

Honey-moon is fast approaching (next week). A few nights in Bangkok, to get into the groove. So, I booked us into Nahm and Gaggan. Both are listed in the top 50 restaurants in the world, but are they that good?

Sure, you can live it up in Thailand without spending a bomb, but I fail to understand how Nahm (rated #12 in the world) can cost BHT2,000/person (~AUD75.00) for degustation dinner, while the highest rated Australian restaurant, at #32, is giving you their experience at AUD190/person. I know, I know, this opens a Pandora’s box of arguments.

Pretty soon, we in Melbourne will play host to The Fat Duck. Yep, that Brayside stalwart which boasts a number of Michelin stars. For 6 months and 45 seats, that means 16,000 people will be served while they are in Melbourne. Getting a table…forget it. Ballot it will be, but at north of $525/person (ex-booze), it is almost cheaper to fly to England and experience it in its home location!

How much are you willing to spend (not including tip) and a meal to remember? Does it need to be a restaurant that is rated by Michelin, or S. Pellegrino or whichever is your go to restaurant reviewers?

For me, that memorable meal may be as simple as some hawker food on the foreshore of somewhere tropical, but it’s not going to stop me visiting Nahm and Gaggan. In the meantime, it is back to the microwave to “cook” dinner for tonight *sigh* 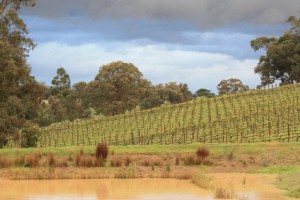 It’s been a very interesting week. I finished up my last job on Friday (a solid 9.5 years of service) and have this week off before taking up my new, exciting role.

Here I was thinking that I would relax lots, catch up on some reading, spring clean the house and maybe even get out on the bike, despite the nasty weather. Instead I have been running around like a mad-man trying to tick off a long list of “to do’s”. Happily, I’ve managed most.

I was invited to a dinner on Tuesday by Armadale Cellars to look at a new-ish wine label out of the Yarra Valley.

The guys who set up Cabrolin Estate have real jobs and enough cash behind them to do it well. Only small plantings, about 5 acres, means the three of them do most of the viticulture, but most importantly, they have recognised they know nothing about making wine. So, what to do? Simple, engage Mac Forbes, a Yarra Valley guru for many years and the right hand man to the late Dr John Middleton of Mount Mary. In case you haven’t come across Mount Mary, their chardonnay and their cabernet driven Quintet’s are simply brilliant.

So, an interesting philosophy of Cabrolin is to have Mac assist them with every step and not focus on the selling price of their wines. The result? Well, they are only making Cabernet and Shiraz, with some blends, but I have to admit, the booze is really very good. The pricing is far from what you’d pay for a Quintet (>$100, if you can get your hands on some), hovering about $40/bottle-ish. Yes, I may have bought a little. Remind me when you are next here to drag out a bottle.

Another interesting aspect of Tuesday was the restaurant chosen. I’ve never been to Steer Bar & Grill before. After all, how often do I head to a steak house?! Sure, the beef was exquisite (I had a Sher 9+ Wagyu skirt steak done medium rare), but it was the conversation with chef Paul Wilson at the end of the evening that was MOST interesting.

I am now a lot less naïve about Wagyu . We discussed my beef (pardon the pun) about Wagyu burgers. Paul shook his head in dismay and explained how it works. There are only 4 producers of pure bred (9+) Waygu cows in Australia. This means their genetic make up is 95%+ of the pure breds in Japan. But, and here is the rub (pardon the pun), even if the animal is 45% Wagyu, some producers still call it Wagyu. There are any number of growers with “mutts”. Paul agreed that there is no point grinding good beef, Wagyu or not.

Something else I learned from Paul was that the better the grade of Wagyu, the more subtle the flavour. So, despite the hype, those looking for a steak are better off with a dry aged, grass fed Black Angus steak. Bring it!

Given the Sher “tomahawk” steak (2.2kg rib eye) at a lazy $270 which graces his menu from time to time and that he buys almost all of the prime cuts from all the pure bred producers in Australia, it makes me wonder what Wagyu is served by other dining establishments? 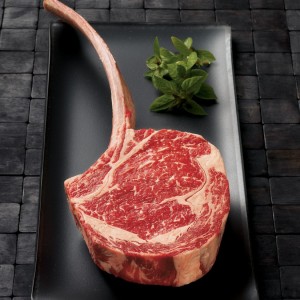 This reminds me of the hoopla around beef raised on a well regarded Australian island many years ago. Is it ok to call it “from a certain island” if the animal grew up on the mainland and only lived its last 6 weeks on the island? Is that enough time to change the character of the beef? Or…well, most disturbingly, when the milking cows go off their milk, turning them into beef? Milking cows are not bred for their beef. I understand this practice has long since stopped, but with the hype around the source of the beef nowadays, it makes me wonder.

In the interim, I can heartily recommend Steer. Word of advice, ask your waiter for help choosing a steak, don’t automatically head for the Wagyu. It might not blow your hair back.

Off to Mt Buller tomorrow. Lots of snow, so some skiing, red wine and work, not necessarily in that order.