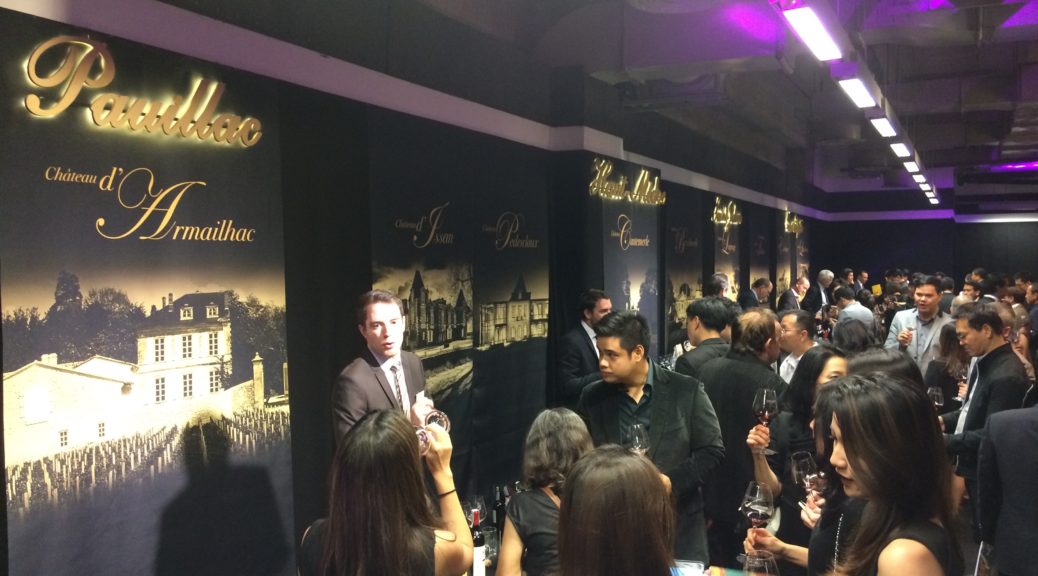 Thanks to my *favourite* local supermarket (take a bow Tops ) I received an invitation to the second annual ‘Bordeaux Rendez-vous’ – a little tasting of 93 wines from Grand Cru producers in the region, with retail prices ranging from BHT1,420 (A$54) to BHT12,660 (A$478) a bottle.

I didn’t quite manage to get to all 93, but as indicated by the pricing there were a range of styles and quality on display. Highlights to my mind included a 2005 Château d’Issan (yours for a mere BHT10,530), a 2006 Château d’Armailhac (a snip at BHT6,130 – though to be fair, their château appears to be half-price too), and there was something utterly sensational when I first arrived that may or may not have been a 2006 Domaine de Chevalier (for BHT8,050), but I can’t remember exactly – serves me right for not taking notes as I did last year…

There were a few disappointments too, though had I been a man with a plan, I would have started with the more affordable wines and moved up from there. Also, as I’m not one of the fabled 1% who can afford extensive cellaring facilities (ahem), I found myself in a bit of a pickle – my limited climate-controlled space is reasonably fully stocked with rather nice Australian and Spanish reds right now (whites are definitely in short supply, but I’m not about to fix that with Bordeaux) – so no new purchases.

I did, however, have a few interesting discussions with the winemakers on hand. 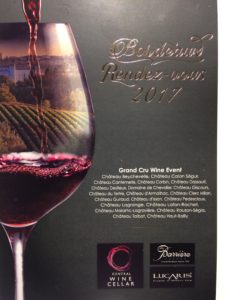 Corks were one thing. Or 93 things, actually. Nothing so gauche as a Stelvin in sight here. One winemaker told me that the extra-long French corks he uses set him back €2.50 each – and that nothing could replace the sound of it being removed, nor the smell. He confided that his family also owns a winery in South Africa, and they do put their whites under screw caps, but not the reds.

I’d reckon that if you’re paying this much for wine, a screw cap adds just a little extra piece of mind. Still, it could be worse: the same guy told me that he had won a bet with his father, and the prize was a bottle of Romanée-Conti  (a bottle for which you’ll be lucky to get change from US$10k) and it was corked!

The other comment that took me by surprise was that “wine is all about marketing.”

The cynic in me thinks everything is about marketing these days, so it came as a surprise to hear someone with a Troisièmes Cru, or third growth ranking dating back to 1855 could sound so cynical – and disappointed – about it too.

But then, maybe he has a point. Even if he reduced his yield to two grapes per hectare and produced two bottles of perfect wine in a good vintage, he will always be a Troisièmes Cru. It almost seems a disincentive to invest. And the same could be said of the Premiers Crus: They’re going to sell every bottle they make anyway, so do they really need to try harder?

I guess that wine can also be a Veblen good.

That said, I’m happy to  trust my palate. I may never taste Romanée-Conti, but I’m not convinced I appreciate Burgundy enough to truly appreciate it – I could try a bottle of very good wine a day for a year for a similar price as a single bottle – even at Thai prices. That is surely a better plan, no?