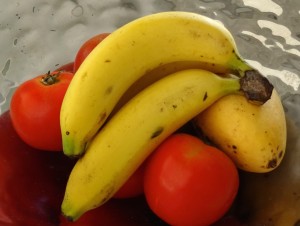 Not a loaf of bread

Fresh bread, you’re right there is nothing like it.

When I first arrived in Singapore in 1997, bread was problematic. I could buy pre-sliced processed loaves at the supermarket, but there was precious little else available. In despair I bought a bread machine. The results weren’t brilliant, but better than any bread I could buy.

Fast-forward a dozen years and bread has been discovered – sort of. The Singaporean Bread Talk chain is everywhere in Asia, and people in Singapore seem crazy for the stuff. I’ve even seen queues.

But when I walk past all I can smell is that sickly-sweet aroma of processed-flour sugary buns. It’s actually enough to make me feel a bit ill. Apparently it’s what appeals to the Asian palate, but calling it bread is something of a stretch. Then again, you’re probably not going to sell much product in a store called Processed-Flour Sugary Buns (though I should trademark the name, just in case).

There are alternatives now – Jones, Swiss Bake, Cedele, and the French place Paul, plus a few independents, are making life much better for those of us who go for a more traditional loaf. Bangkok’s even better – there are enough Europeans in town for a market for the stuff. Conkey’s and Maison Jean Philippe both make excellent loaves – and at vaguely reasonable prices.

Unbelievably, even Tesco Lotus in Samui has a bakery that churns out edible bread, plus there are a few European-run independent bakeries such as La Fabrique which has its main bakery in Lamai and an outlet near Chaweng. Who would have thought it?

But baking is just not an Asian thing. It’s unusual to find a domestic kitchen with an oven – of four places I’ve lived in Asia only one was equipped with an oven. That is bound to change, what with the cupcake craze (yep, every hipster in town wants to open a cupcake shop). For the moment though,  your bread recipe is a bit lost on me for now.

Yes I still roast meat on the old gas barbeque, but that’s not a bread-baking solution. (Then again, maybe it could be?)

I miss the oven though. Bread for one thing. Home-made pizzas. I’m hungry just thinking about it.

It’s funny though how much paraphernalia can accumulate in a kitchen. All those special tools that serve one function. A good kitchen shop is a bit like a good hardware store – it’s a bonanza of possibilities. But like hardware, there are some things you don’t really need. A garlic crusher? Use a knife, slice and flatten it. Really.

Cooking implements are different. A paella pan cannot be directly replaced. Or a cast-iron pot for slow cooking. And specific serving implements are hard to replace too. But give the olive pitter, or banana slicer a miss. Banana slicer? Yup. You can get anything on Amazon (do yourself a favour and read the user reviews, they’re hilarious).

An oven though. That’s an important cooking tool. I’m thinking I need a pizza oven. I’ll fuel it with the fat ends of the coconut fronds, and do some bread and a pizza at the same time.

I’m reserving a spot for it in the veggie patch right now.

One thought on “Daily Bread”