I see you were in New Zealand?! How was that? Did you survive the Savalanche?

Spring has sprung here. The weekend at Mt Buller was, well, winter seems like it is over. Warm day on Saturday and foggy, with a little rain on Sunday. Per usual, I worked both days but it was hard to keep the crew motivated in the rain. It wasn’t too hard to convince them that a coffee stop at Koflers was a good idea.

I’m not cooking as much at the moment. Nor are we going out terribly much. Pre-wedding diet don’t you know!

I am lucky enough to get a dinner a week at the local. The Carringbush is doing well to keep things fresh. A recent visit, Mick (one of the managers) let me know he picked up some Yarra Valley truffles from a mate. Who am I to turn down something yummy sprinkled with truffle shavings? There were a couple of offerings, but I found it hard to go past the veal backstrap schnitzel with truffled macaroni and cheese. So much truffly, cheesy goodness!

Mum & dad joined us for a meal later in the week. Royce went the chicken Kiev with lobster & scallop butter and mashed potato with shaved truffle. Also much truffly goodness. Hard to believe, but it was the first time Royce has had truffle.

Had hankering for a burger on Sunday whilst driving back from Buller. So it got me thinking. What could I do only on a BBQ, but be worthy to grace our table. Easy, lamb-burger with all sorts of goodies locked in. Even better, lamb-burger on some fresh home-made Turkish bread. I reckon you can do the bread on the BBQ too. Got to be the easiest bread, other than pizza base. Worth a try if BBQ is your only option.

The bread takes longest to make, so give yourself a good 90 mins:

Carefully weigh the dry ingredients in big bowl and mix. Take temperature of the dry mix. Add the olive oil and then water, but make sure temperature of water adds to 50 degrees with temp of dry ingredients (e.g. if dry mix is 20C, water needs to be 30C). Mix that mess for about 10 mins until the dough begins to pull away from the sides. Cover it with glad wrap and set in warm place for about 90 mins. It should rise to about 3x original. 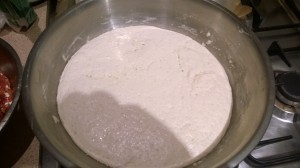 When you’re good to go, turn it out onto a lightly greased tray very carefully. You don’t want to knock much air out of it. Lightly dust it with flour and/or sesame seeds and press finger tips in to make dents. 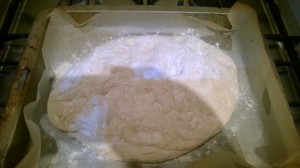 My lamb burger mix is simple, but oh so good on the fresh, hot Turkish bread. In a bowl, whack in an egg, a handful of chopped parsley, a teaspoon each of ground coriander seeds, cumin, smoked paprika and turmeric. 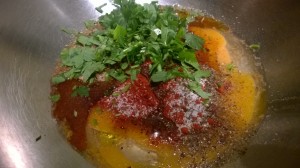 A splash of olive oil and the minced lamb. To really set if off, crumble some fetta into the mix and form into burger patties. 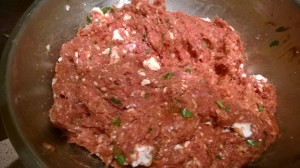 BBQ those bad boys and serve with some shaved cucumber, char-grilled eggplant and if you can wangle it, some chilli relish. 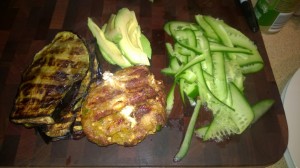 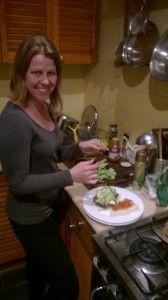 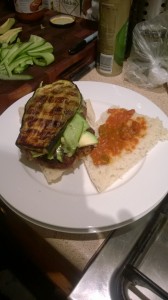 When are you heading back to the island? Or have you got a BBQ in Bangkok? Not even sure if you can get lamb easily in Thailand?

Better fly, rare moment, so should clean the house or something.

Sometimes it is the simple things which bring joy. While I enjoy it when restaurants serve me something extra-ordinarily complicated or hard to come by, I often prefer one that celebrates good produce, done simply, without fuss. My latest favourite is from our local pub, the Carringbush. While the menu is likely to change and it will vanish as fast as it arrived, their steak roll with beautifully cooked sirloin, smoky bacon, gruyere and some “garnish” is tasty simplicity. 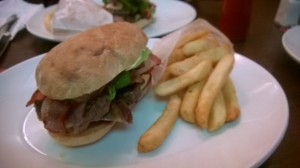 Winter has well and truly arrived here in earnest. The snow has come quicker than expected after “snow-mageddon” hit. It’s cold and windy in Melbourne. People are sneezing. Days are short, but getting longer. Oh, and it seems schools are on holidays, again.

My weekends in Melbourne are rapidly coming to an end until late September.

As per usual, I’ll be heading up to the ski fields every weekend again this season. It sounds idyllic, but comes with its own set of problems, mostly of the domestic kind. On balance, our time in the snow is worth it.

The old joke goes a little like: how does a ski instructor become a millionaire? They start with $2 million.

The pity is I don’t have $2 million, but I am a ski instructor of sorts. Ok, technically I am a race coach, but same, same. So living in a place where people joke openly about the price of things, $10 for a can of cola and a chocolate bar? $25 for a basic pizza? It is simply not possible for a mere mortal like me to afford to pay for accommodation, beer, petrol, beer, parking, ski equipment, beer, ski clothing (ok, some of that is well looked after, thanks I/O Merino) and the obligatory post ski beer. Something has got to give. Notice the omissions? Yep, food and wine.

It’s easy to carry a bottle up each weekend, but someone drops by before dinner and *poof* that bottle you brought up to have with the <insert pre-prepared meal> is gone. So, you bring a couple bottles up, just in case. And drink them both even if nobody drops by.

Ok, pre-prepared meal. Living in a lodge with shared cooking facilities, means that intricate menu is just not an option, nor something with a long cooking time. Easy solution? Make something during the week and freeze some to reheat and serve with some pasta, risotto, bread, other. Maybe even some vegetable stuff. No, fries with post ski beer don’t count as vegetables.

I’ve settled back into making ragu. Long, slow cooking of any meat, with suitable additions can result in some cracking results. Ok, I am partial to things like rabbit or duck ragu, but pork or beef is well and truly ok too.

To most people it sounds daunting, but so seriously easy. Eg, bone some duck marylands (get butcher to do it for you if you are that lazy), chop into pieces and fry off until brown. In a heavy baking dish add the likes of garlic, onion, red wine, tinned tomato, herbs like bay leaves and rosemary and cook long and slow. Don’t forget to add seasoning. Hardest part is dealing with the amazing smell throughout the house. Stuff like this is great with pasta, rice or risotto. 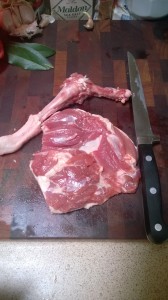 Crack open a bottle of something with some body, a cabernet, shiraz or the like and all that energy used on the slopes quickly recovered. I found a bottle of 1996 Vasse Felix Cabernet from Margaret River in the cellar, but if you can’t lay your hands on something like that, any cabernet from Margaret River or Great Southern (Western Australia) from 2011 is likely to see you right.

Before we head up, some dining out to be done in Melbourne. Went to a nice place last week, chef’s hat restaurant. Not going to name this one as it was far from worthy. I’m truly hopeful the poor service (read: no service) was because their key staff had called in sick. The suckling lamb was, well, it had plenty of garlic, but very tasty. 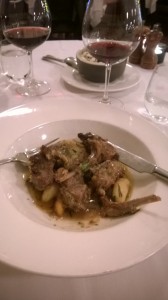 I suspect when next I write, it will be about apricot moguls, hot chocolates and post ski beers.