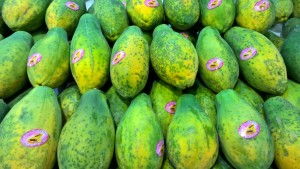 Living in the tropics certainly has its benefits. Something I’ve always envied. Though we don’t get it so bad here either.

Apple season has just finished, but there are still some good late season varieties around. The demand for tropical fruit here is pretty high too. We’re especially lucky, as you know the Vietnamese community is significant here. The demand for tropical fruit and vegetables is high. Though it does seem a little odd when the temperature outside barely reaches double figures.

Still some mangos around, as well as some mangosteens. Most are coming from Northern Territory. 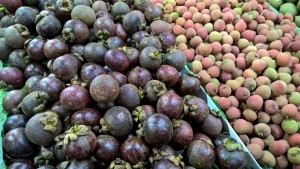 One of my neighbours grows a lot of his own food, which in itself is a feat in inner city. Only a couple of weeks ago Mo gave us a bag of tamarillos. Fabulous little bundles of sweet and tart goodies. If you’ve never had one, they are a little like passionfruit, but with some flesh. I’m a big fan of them. 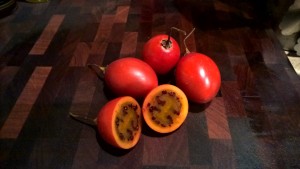 Just down the road from us are a host of grocers, butchers and fish mongers. Buying fresh ingredients every day is the way it’s done. If only I didn’t work full time, I could do the same!

We’re off to the snow this weekend. Finally there is some snow. The natural tendency is to cook huge amounts of high carb food, pasta, etc. but it simply doesn’t get cold enough here to burn that many calories.

Balancing a good warming, hearty meal without too many calories is the trick. I’ll let you know how that goes. Either that or I’ll have to ski a bit harder.

Time to find some of our thermals. 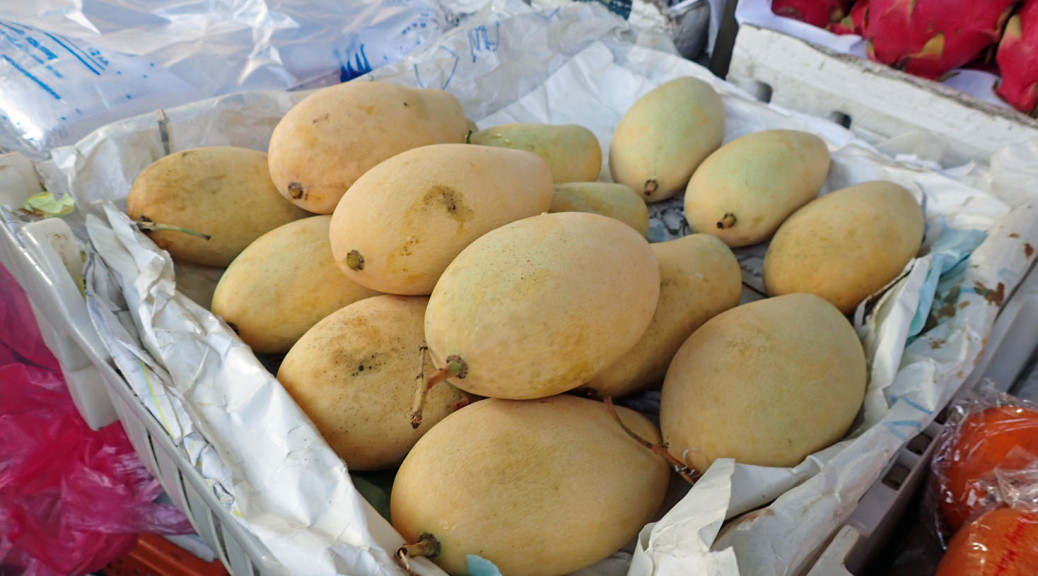 Being on a health kick of late, there’s a lot of fruit on the menu. I’m pretty good with that as a concept, particularly because we have so much good fruit available. Forget the sad cut fruit on your hotel’s breakfast buffet – there’s a world of fantastic fruit available in Thailand.

I don’t know about you, but mangos are pretty much at the top of my list. I know things have changed in Australia, where mangoes were once only a special Christmastime treat, but Thailand takes that extended season further, and we have them pretty much year-round. Thailand apparently produces more than two million tons of mangoes annually, and I’m doing my best to keep that number up.

You’d think that’d make me sick of them, but I am genuinely happy to eat mango every day. There’s a little market in the mornings on the Lumpini corner where our local restaurant sets up for the evenings, and a vendor there usually has two choices of mango – a sweet one, probably the local Nam Dok Mai variety, and a green one for salads.

The supermarket often has a wider choice of the local elongated varieties, some of them more than a kilo each! A smaller one that’s in season now is a hybrid between a Sunset and a local Thai variety that goes by Maha Chanok. They smell so sweet that it is like having a bouquet of flowers in the house, and worth it for that alone, which is good, because the better half reckons the taste is not that great and they’re a little stringy.

Another one with a super sweet aroma led me through the market by my nose to what looked like a Bowen mango, but instead one that goes by the rather romantic name R2E2. You could assume it was cultivated by a Star Wars fan, but apparently it was from Row 2 Experiment 2 at the Queensland Government’s Department of Agriculture and Fisheries Bowen research station.

It’s one of those rounded plump mangoes, with non-stringy, sweet and flavourful flesh. Amazing the difference from the slightly tarter local varieties. When I found a grafted R2E2 tree at a market in Samui last year I snapped it up.

And there’s another reason to love mangoes: while everything else in the garden is shriveling up after a month without rain, the mangoes are powering ahead. They seriously look as though they’re dormant for most of the year, and then when the conditions get hot and dry, shazam: loads of fresh growth. Love it.

I’m obviously a few years away from picking my own fruit, and am experimenting with sprouting some other seeds in the meantime, but hopefully one day in the near future I’ll have a nice extended home-grown mango season. In the meantime, it’s not as though I’m starving.