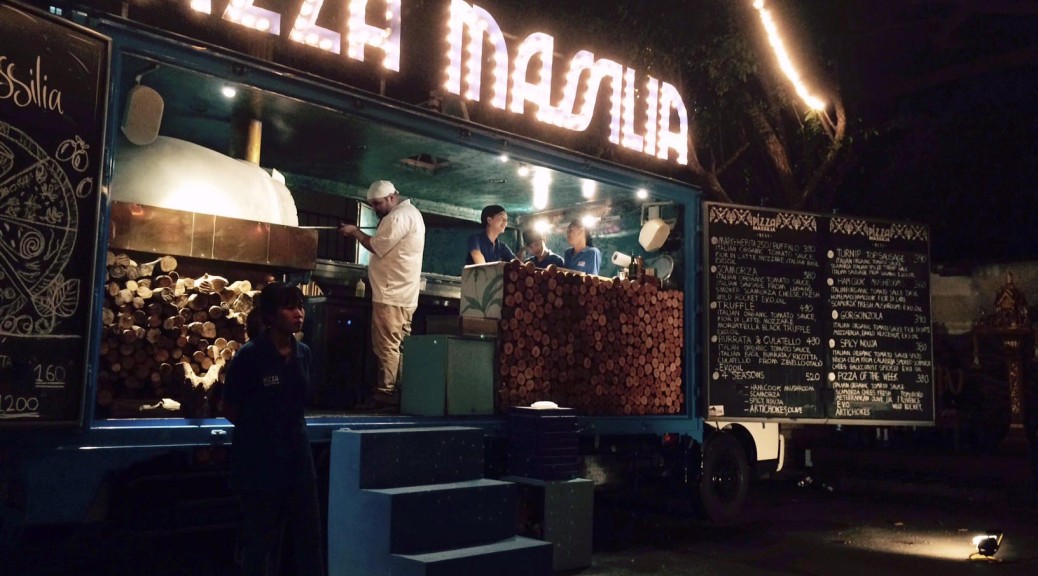 I stopped by a pop-up pizza joint in the Silom area in Bangkok recently. Not a bad pizza, though running out of fresh tomatoes and onions in a pizza joint seems a little out of order – I’m calling it teething troubles.

But making a proper pizza in a wood-fired pizza oven mounted in the back of a truck isn’t such a bad idea – even if the ingredients are mostly imported.

This lack of local produce should kill any claim Pizza Massilia may have to being a hipster business – any self-respecting hipster joint sources ingredients locally, didn’t you know? – that and the fact that it is a joint venture by a couple of Bangkok’s brand-name chefs.

Hardly livin’ the hipster dream then.

But just as the whole hipster look was easily appropriated from elsewhere, the hipster image can just as easily be appropriated by any corporate entity. MacDonald’s is already giving it a shot.

There’s absolutely nothing wrong with the food at Pizza Massilia, and for a parking lot it is an awfully attractive setting, but it does raise the question about why it isn’t in an actual building. There is not going to be any business conducted at all if it happens to rain, and rents are hardly at Singapore levels in this town (less than a third, in fact, so if you ever wondered why a coffee in Singapore requires a mortgage, the ‘landlord tax’ may well be the answer).

But the hipster trend may offer an answer to why a pop-up is actually a good idea.

Last year Alex Proud wrote a piece in The Telegraph about being ‘Shoreditched’; the UK version of Brooklyn or whatever other area around the world has been taken over by the bearded set and the process that entails:

“You find a previously unnoticed urban neighbourhood, ideally one that’s a bit down on its luck. Pioneer hipsters move in and coolhunters ensure it starts trending on Twitter. A year later, the mainstream media notices and, for the next 12 months, the neighbourhood is byword for urban cool. Soon property prices soar pushing the original residents out, the bankers (always a trailing indicator) begin to move in and a Foxtons opens. Finally, the New York Times runs a piece in which it “discovers” the area and the cycle is complete. The last hipsters move on and find a new neighbourhood to play with.”

In Bangkok nailing down the cool areas is rather difficult – they seem to change from one month to another, so not quite enough time for the New York Times to ‘discover’ it.

But there is one thing that the pop-up trend in Bangkok has failed to notice, and that’s the fact that just about every street in this town features a pop-up restaurant or two, or twenty. 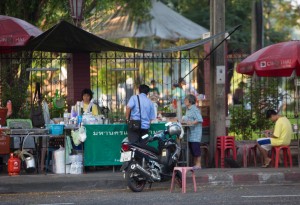 Not a pop-up, apparently

My local corner restaurant is set up and completely pulled down and carted away six days a week. The greater irony is that they’re probably using local ingredients too (they’re cheaper, after all). All they need are beards and fixies and they’re set.

Until the next trend arrives.

In the meantime pop-ups are the height of fashion, and hawkers are not. Go figure.